In Norse mythology, the Kirkegrim guards churches and cemeteries against evil spirits. Commonly in the form of a black dog or a dark, child-sized man, our Kirkegrim takes the form of a little, wide-eyed black cat. He was a feral kitten, tricked and trapped out of his life in the parking lot and transported into a strange new world of people and other cats and a few dogs. He's lived in our house for about a year now and slowly, ever so slowly, is making himself at home. 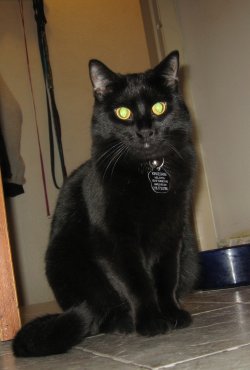 He can frequently be found lurking at the top of the basement stairs or in the doorway of the spare bedroom. Both locations allow him quick and easy escape routes to safe places where nobody can get him. Before the base strips were in, he could often be spotted crawling out from under the kitchen cabinets, especially around meal times. He is uncomfortable under scrutiny and will tense to run any time anyone makes eye contact with him. Moving within five feet of him will usually send him scurrying. He will leap and scamper off at any noise in general.

And yet, he always seems to be nearby -- just at the edge of the family activity. When we are in the bedroom and all the dogs and cats and people are settled in to sleep, he's a dark shadow in the hallway, peeking. The other day, while we were watching a movie, he snuck up on the cat tree in the middle of the living room and snuggled up with one of the other cats. My husband noticed him and said, "Is that Grim?." When he noticed us looking at him, he quietly slipped down and away, into another room. When we are in the kitchen, he sits in the doorway at the top of the basement stairs, watching. If you move slowly, sometimes you can pet him then. At breakfast time he is in his usual spot, in the bedroom doorway, waiting for the food to come. While the dogs are distracted with their meal, he quietly, quickly makes his way across the kitchen and hops up to eat with the other cats. This is when he is most vulnerable to scritches and snuggles and, when needed, capture. He has a feral cat's appreciation for a free buffet and his tunnel vision for food makes him easy to lay hands on.

But Grim's true kryptonite is the butt scritch. As suspicious and flighty as he is, Kirkegrim cannot control his elevator butt. Touching him anywhere on his back will generally send his front half downward and his rear end up. A few scratches or strokes and he falls right over, begging for a belly rub. He purrs and squirms with wild abandon as his feral, frightened brain takes a break and his happy-snuggly-kitty side comes roaring to the forefront. Basically, he's a sucker for snuggles. If you can get close enough to touch him and there are no big, noisy, scary distractions, he just melts like butter. It takes a bit of patience and good timing to win those precious moments with him but, boy, are they worth the effort. It's a wonderful feeling, to touch another being, and to watch their anxiety transform into pure joy.
Posted by Groomerisms at 8:54 AM