Yesterday a client dropping off mentioned that there were some "kittens out there."

"We saw them as we were driving in," she replied.

She saw three, huddled together, next to the dumpsters, as a matter of fact.

Another client had also spotted them and the two of us managed to wrangle them up. The first was easy to catch. The other two darted back behind the dumpster, amid the piles of smelly things, and it took a few tries to flush them out and capture them. We set them up in a cage at the shop with a mushed dog cookie to nibble on. A little bit later, some of the wait staff from the restaurant caught another one and brought her over, for a total of four.

They are about four, maybe five weeks old. Their eyes are still blue but they have full sets of teeth on board. They were horribly filthy and stained from dumpster diving. And their foraging didn't seem to be very successful -- they were weak and skeletal. But now they've had baths, numerous courses of kitten chow, an amazing number of bowel movements, and a quiet, restful night. Already they're looking stronger and more vibrant.

They're afraid, though not "born in the wild" afraid -- maybe just "not used to much handling" afraid. They have no sign of fleas or upper respiratory infection either, which makes me think they may have been dumped out there rather than having been born out in the woods somewhere. It's all speculation, of course, but the thought of someone dropping off babies like that is intolerable. Even sending them off to certain death at a city pound is a better fate than letting them starve or freeze or be eaten by something in the night on their own. Dumping kittens is pure cowardice, whether they are dropped somewhere remote or somewhere with people. These are domestic animals -- humans bred them to be companions. They are our responsibility.

These babies are another reminder of how important it is to prevent pregnancies and more kittens. I remember reading a statistic somewhere that in order for all the cats in the US to have homes, every single person in the country would have to have seven cats. Not every household, every person, man, woman, and child. For the love of these unwanted babies (and since these will be wanted, will be adopted, will be taken care) for the ones I can't get to, please, spay them all. Neuter them all. There are just too many of them and too few of us. Adopt, always adopt, and always spay and neuter. Each of those single, simple acts by just one person will stop hundreds of thousands of dumped or feral kittens from ever existing. They can't suffer if they are never born. And it's the same for the dogs.

So these little darlings, these lucky few, have names now. From left to right they are Ellipsis, Placid, Rhys, and Wednesday. 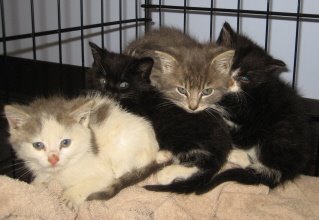 Ellipsis is definitely the spitfire. She the dominant one, who charges the food dish and spits and hisses if she feels threatened. Today she realized she likes the fingers that come in and scritch her under her chin and massage her head and hit that elevator butt button. She leaned in and purred. Soon she'll be screaming for her meals and pawing at people for attention like a regular kitten.

Placid is the calm one. She is a lovely tuxedo cat with peaceful eyes. She's much less frightened than the others, more docile and trusting.

Rhys is the only male and if malnutrition doesn't stunt his growth, he's likely to be a big boy. He has big feet with white socks. I can't imagine he'll grow into anything less than a big teddy bear.

Wednesday is the shyest of the bunch and her eyes are ever watchful. She's also a tuxedo, with a nice white blaze on her face and a white belly. Her ears curve a little at the top, giving her an almost cartoonish appearance. She's likely to be one of your stereotypical aloof cats when she matures, mysterious and watchful. She'll be the perfect lady for someone who loves a more independent personality.

Of course these are just first impressions and although I've seen many many kittens grow up, they usually have some surprises in store as their personalities solidify. I expect them to relax soon -- within a week, if not in a few days -- and start playing and wanting to cuddle like average, well-adjusted kittens. I'll probably miss these days then, because they're nice and quiet and calm right now!

They'll be seeing a vet soon and I will definitely be asking my rescue contacts about a vet who does early spaying and neutering. They're probably too thin just yet, but they'll be ready for new homes in a few weeks, I should think. Anyone in the area who's been thinking about growing their feline family, please contact me at the shop! I'll be asking an adoption fee to cover vet expenses and of course I will be looking for good, responsible homes for them.
Posted by Groomerisms at 9:28 AM