Luke vs the Skunk

It was about 10pm and I was out with my two German Shepherd boys, watching them compete in their daily pre-bedtime marking contest. Pax was into it, but Luke's participation was half-hearted. I know he'd heard or smelled or seen an animal in the yard earlier that night because I'd caught him fussing at the window.

Instead of peeing, he was sniffing around, hoping the whatever-it-was was still around.

As I watched him scan the darkness, I automatically went through a mental checklist of what sort of animal he could be looking for.

It wasn't a deer. He'd been very interested in them when we'd first moved in, but our yard is like a deer buffet. There are so many passing through on a regular basis that Luke completely ignores them.

He still gets excited about the squirrels, though. And there's a pair of chipmunks living in a den beside the back porch steps.

It was too late though for those guys. So maybe it's a...?

Luke interrupted my thoughts by gathering himself up and charging towards the side of the house. The boys were on flexi-leads (I, like most groomers, hate flexis on principle, but they make pee-time easier, so I do use them in the privacy of my own yard). I hit the lock button and dug in my heels. Luke leaned forward, straining and deadly quiet, which meant that whatever was back there was right there, close enough to spit on.

I dragged back on the flexi and angled myself so I could see around the corner. Backlit by the back porch light was the very clear signature hunch-backed, fuzzy-tailed outline of a skunk.

Luke did a half jump-lunge and managed to drag me forward an inch or two. The skunk ignored him, digging placidly around in my flower bed. That nonchalance was a red cape to Luke, who pawed and snorted, straining to win the tug-of-war and get a face full of eau d' eww.

"Oh, hell no," I said, turning and digging in, heading in the opposite direction.

I mentioned earlier that Luke is one of two German Shepherds. This is the part of my story where things could have gone really badly. It didn't, though, because Paxy is the good one. 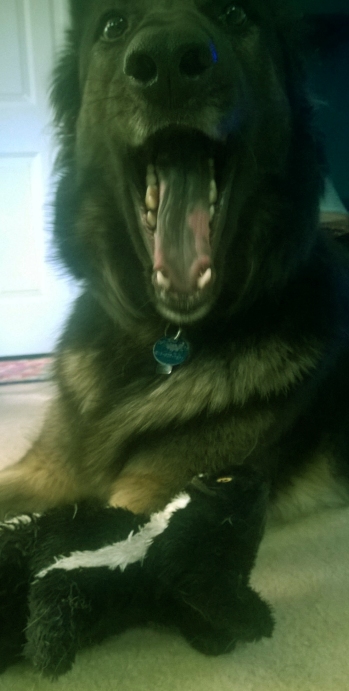 Not only is Pax not interested in wildlife, he also doesn't like to stay outside for very long. He was rescued years ago from a bad neglect situation. It took him a while to get comfortable with the notion of being in a house with people, but now he's very much committed to his indoor lifestyle.

He'd finished marking and went to stand anxiously by the front door. Bless that dog. If I'd had two dogs like Luke, we all would have gotten sprayed.

But since I only have one bad dog and I outweigh him by at least 50 pounds, Luke's choices were follow or be dragged. Disaster averted. He stopped pulling and we all retreated into the house.

Of course that little episode got me thinking -- what if things had gone a different way and I had a skunked dog on my hands?
If you're not a groomer, you might want to skip bathing and live with the leftover skunkiness until you can get your dog in to see a grooming professional. If you've followed my steps, you might be OK to do a full bath, but you'll get better overall results if you let your groomer handle it.

That said, you might not be able to get into your regular groomer right away (the good ones are always booked out). Bigger shops are more likely to have walk-in services available than smaller shops. The big box stores often have the best availability. Wherever you go, be sure to tip well.

In any case, you will likely catch subtle whiffs of skunk on occasion. This can last up to 6 months. The smell will get stronger when the dog is wet. It's the nature of skunk oil and even the best deskunking can fail to remove 100% of the oil. Misting the dog with vinegar and dabbing some minty mouthwash on his collar periodically does help, though.

Since Luke did not get skunked (and never has, knock on wood) I bought him a cute skunk plush dog toy. I got mine at Big Lots and he's terribly cute. I looked online for him and couldn't find any, but if you want a skunk toy for your dog, this one from Amazon is pretty cute and doesn't have stuffing, which is probably better anyway.

You might be wondering, "What about those deskunking products they sell at pet stores?" I've deskunked a lot of dogs and I've tried quite a few commercial deskunking products, but I've never found one that works better than the baking soda and peroxide recipe. Feel free to try one and let me know how it works out for you.

Anyway, the skunks are out there and they have every right to defend themselves from nosy hoodlums like Luke, so if you have a dog, check your cabinets and make sure you've got some peroxide and baking soda hanging around. Don't mix them together until you need them, though. The bubbles don't last and it's that oxygenated bubbling volcano effect that makes combining the two such a good cleaning agent.

Above all, remember that prevention is the best cure. Power up your flashlight and check your yard before you take the dogs out, especially after you catch catch them fussing at the window at night!

Posted by Groomerisms at 8:30 AM